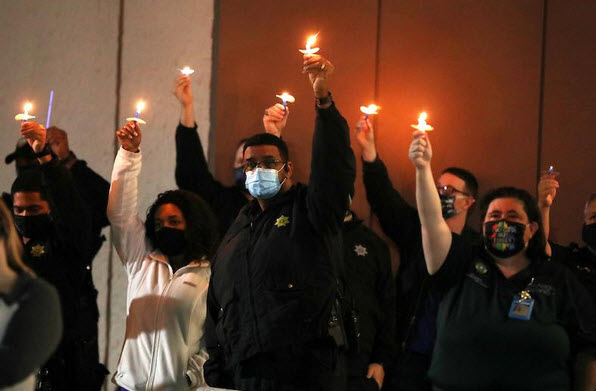 Our entire Sheriff’s Office family is saddened by the sudden and heartbreaking loss of our long-time brother, Sgt. Bruce Watson, and the senseless violence at a Midtown nightclub that led to three deputies wounded by gunfire and the death of a woman.

Sgt. Watson, a 20-year department veteran, was fatally struck on his way home by a vehicle in the Pearland area after serving as an off-duty motorcycle-escort for a funeral procession.

Sgt. Watson was assigned to the Patrol Support Services Bureau, working the night shift at the Emergency Dispatch Center. He joined the Sheriff’s Office in March 2000 and previously served as a Detention Sergeant in the Harris County Jail, a patrol field training officer, and an instructor at the training academy. He admirably served his country in the U.S. Army, rising through the ranks to sergeant, before returning to serve his community.

Through his life of public service, Sgt. Watson consistently invested in the next generation of deputies, mentoring them and guiding them to become our agency’s future leaders. His critical roles at our academy and in the field set the foundation for many deputies’ careers – modeling every aspect of how to apply academy knowledge to real situations involving real people and teaching young deputies the right way to do the job. For Sgt. Watson, this was one of the most rewarding assignments in all of law enforcement.

On Tuesday evening, our teammates joined fallen Sgt. Watson’s family for a candlelight vigil outside the Emergency Dispatch Center. His profound impact on the Sheriff’s Office was evident in the many anecdotes and memories shared there. He was remembered as one-of-a-kind with unmatched care for others – walking around the dispatch center to simply check in with his colleagues or occasionally bringing food for everyone to enjoy. He was also known to share words to lift his teammates during stressful times. A communications officer who worked closely with Sgt. Watson said he made it his mission to be there for you and she couldn’t have asked for a better watch command center leader. A common thread throughout the evening was Sgt. Watson’s immense pride in his newest role – grandfather – and how he embodied a great man of faith and community in all he did.

As we near Law Enforcement Appreciation Day, this past week’s tragedies are a stark reminder of the day-to-day dangers police face on the job and the work that still must be done to improve our dangerous roadways and tackle the rise in shootings and gun violence amid a pandemic.

Take a moment this Saturday to celebrate the deputies patrolling and protecting your neighborhood. These selfless men and women continue to perform their duties with the added stress of COVID-19 and the recent loss of a teammate. We are forever grateful for their endless service and sacrifice.

We’re also grateful for the support we’ve received from the Houston Police Department and extended law enforcement community across our region and country, as well as the outpouring of prayers and positive thoughts from the residents we serve. Our injured deputies remain in good spirits and continue to recover.

Please keep Sgt. Watson’s wife, a 21-year Houston Police Department veteran, and his three adult children, sister, grandbaby, and all those he touched in your thoughts during this tremendously difficult time. Donations for his family may be made in his name to the Harris County Sheriff’s Office Benevolence Association.

Funeral services for Sgt. Watson will be held on Tuesday, January 12 at 10:30 a.m. The services will be live streamed on our Facebook page.

Our agency is better today because Sgt. Watson walked through our doors. Your brothers and sisters in blue have the watch from here.

For persons with questions or needing help regarding website accessibility, or to request the provided information in alternative formats, please call (832) 463-0231.